Keyboards are a useful tool that can allow you to practice your technique when a full sized piano is not available, but some models are better than others are.

Those who want to experience the most authentic feel while playing opt for one with weighted keys, which simply put, makes you feel like you’re playing an actual acoustic piano. Not all weighted keyboards are alike, so refer to our guide to see which brands make the best weighted keyboard models and find out what you should pay attention to when shopping for one.

What You Need to Know About Weighted Keyboards

Anyone who has ever played on an acoustic piano knows that the quality of sound is what really sets these instruments apart from their digital keyboard cousins. Here’s how the acoustic piano works:

The in-built resistance also helps to develop finger strength and control. These are very useful factors, especially for students.

Through the use of technology, digital keyboards have found a way to make up for that – it is called weighting of the keys. Keyboards with weighted keys come in two types.

What Factors Will Affect Your Choice of Weighted Keyboard?

Apart from being either fully weighted or semi-weighted there are a few other points you’ll want to consider as you shop around for the best weighted keyboard for your needs and style. 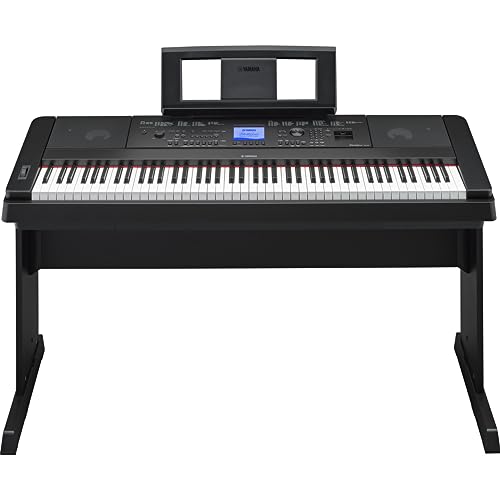 Topping our list, and quite understandably so, is the Yamaha DGX-660. This is more than just than an awesome keyboard (we’ll get into that in a moment). It’s a bundle that includes practically all you need as a beginning learner or if you’re looking to invest more time and effort in your piano practice.

The DGX-660 comes with a full-size, 19-inch piano bench and a handy dust cover. You also get a piano sustain pedal plus a piano book and CD combination titled “Focus on Piano” which helps improve your progress as you learn.

Another item in the DGX-660 bundle that we really like is the multi-use, studio-grade headphones. While headphones are a common extra, it’s good to know that Yamaha opted to add a high-quality set. We figure it’s just in keeping with the superior quality of the rest of the items.

That brings us to the keyboard itself. This digital piano features 88 fully-weighted keys to replicate the feel of an acoustic piano as you play. You can also connect a microphone to sing along to the music you are making and share your song by recording it to your USB device.

Add to that, an LCD display for lyrics and scores plus Yamaha’s Pure CF Sound Engine and you really understand why Yamaha takes all three of the top spots in our search for the best weighted keyboard. 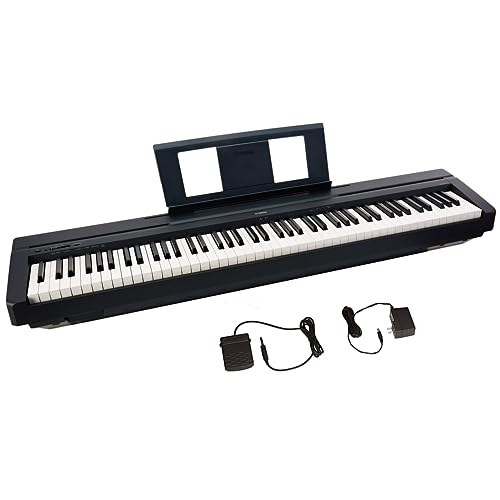 88 fully-weighted key and 64-note polyphony are perhaps the first features you’ll notice as you begin to admire the Yamaha P45. That’s not just because of the quality of sound it produces (thanks to Yamaha’s Advanced Wave Memory Stereo Sampling). It also has to do with how portable it is.

The Yamaha P45 weighs 25 pounds and has a streamlined design so you can easily move it around from one performance location to the next.This keyboard also has a USB port and allows you to do 2-voice combinations for more interactive playing.

We noted that this keyboard is a great choice for intermediate to professional players. Those persons should be aware that the Yamaha P45 keyboard has a bundle option which includes a keyboard stand and a padded seat. 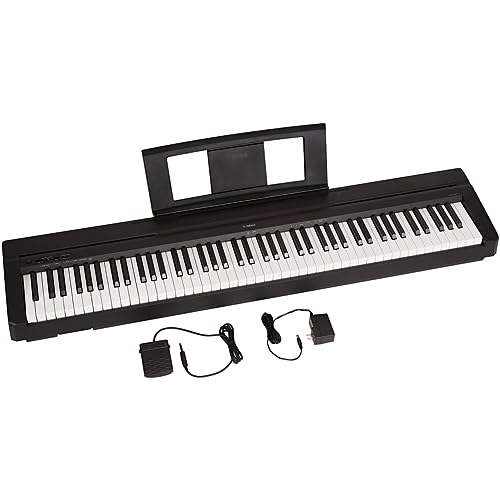 Here is yet another model from the piano masters – Yamaha. Just like the previous model, the Yamaha P71 gives you 88 fully weighted keys and the benefit of acoustic piano hammer action.

It also gives you 10 voices and its Dual Mode feature lets you play two voices at once. Yamaha’s exclusive Advanced Wave Memory means the quality of sound produced by this digital piano is just about as good as it gets.

We found it easy to appreciate the simplicity built into this keyboard. Most features can be programmed with the touch of just one button. So, if you want to spend more time playing and less time fiddling with controls, this is a superb choice for you.