Apple’s Logic music production software has become a revolutionary tool for contemporary artists. Allowing users to create music without the need for physical musical instruments, Logic is any modern musician’s dream come true. Of course, while the Logic can generate high quality audio without instruments, it needs a device to control it and input virtual sounds. This is where MIDI controllers come into play.

MIDI controllers are devices that with buttons and pads that simulate the sounds of different musical instruments. They’re essential for music creation with Apple’s Logic software. So if you’re planning to get started on your virtual music creation stint, it’s essential that you buy the best MIDI controller for Logic. Join us as we take a look at the top controllers currently on the market.

A Guide to Choosing the Best MIDI Controller for Logic

Based on appearances alone, it’s easy to tell that the choices for MIDI controllers for Apple’s Logic are vastly different. This is because manufacturers understand how users often have different preferences and needs when it comes to using a MIDI controller.

If you’re not quite sure which one suits your standards the best, don’t sweat it. This short and easy guide should tell you how to land the right one for your use.

Both keys and performance pads can play the same sounds, but the latter is often preferred because of its ability to sense velocity. This simply means that the way you touch the pads change the way they create sounds, unlike keys that don’t change output no matter how you might press on them.

The only downside with performance pads is that they take up much more space, so you may not have as many of them on your device compared to keys. Most MIDI controllers have a maximum of 8 performance pads, while those with keys can have over 80.

For instance, some models have 5-pin MIDI DIN jacks that make it possible for users to hook their MIDI up to external MIDI instruments. These are often compatible with more contemporary instruments like hardware synths.

CV and Gate outputs on the otherhand can allow you to connect and modulate non-MIDI or vintage synth gear. This can greatly extend the functionality of your Logic, giving you more options and greater control over the music you create. 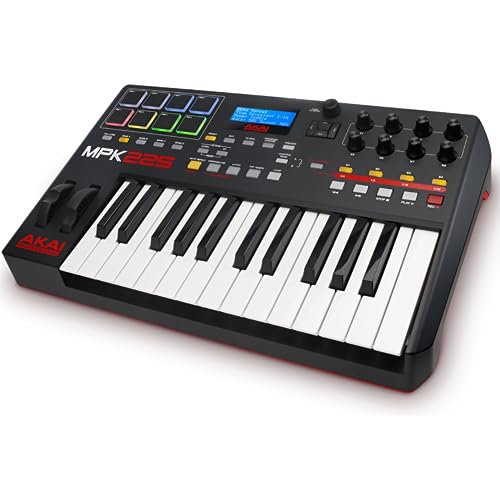 The Akai Professional MPK225 25-Key Keyboard and Drum Pad tops our list as the best MIDI controller for Logic for a number of different reasons. This top notch device delivers a powerful musical punch, despite having a small, compact, and lightweight body.

The keys on the Akai MPK225 feature semi-weighted action, which gives a reasonable responsiveness to the touch. Across the top of the controller are 8 knobs which users can assign functions to for a customized experience that suits your needs. The device also comes with 8 performance pads that allow users to experiment with a variety of sounds thanks to the pads’ velocity sensitivity.

Coming with its own music software program, the MPK225 is perfect for users who like tinkering with their device and exploring more software choices. Despite this though, the controller is compatible with the ever famous Logic which is what most buyers have used it in combination with. 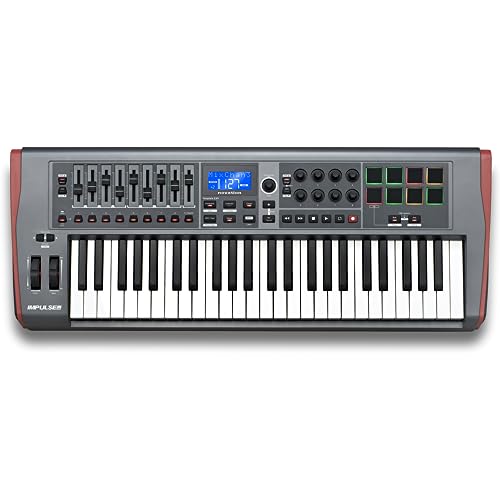 Much like the previous entry, the Novation Impulse 49 USB MIDI Controller Keyboard features semi-weighted keys which are responsive to the touch and bounce back easily from each press. The device comes with 49 keys, which falls right smack in the middle of industry standards for full sized MIDI keyboards.

With a custom LCD screen, 8 knobs, and 9 different faders across the top of the controller, the Novation Impulse 49 allows users to control plug-ins straight from the device, making it a lot easier to adjust and modulate sounds and music without having to face away from your MIDI controller. It’s also compatible with all major DAWs, so you can leverage each tool to improve the quality of your output.

For those who want something capable of faster contemporary beats, the Nektar Impact LX49+ Keyboard Controller has high quality synth action keys that are highly responsive. Unlike other MIDIs, the Nektar’s keys are also velocity sensitive, so users can generate bouncy, twitchy beats without having to put their wrist through all the work.

Across the top of the controller is a dedicated control center that lets users adjust, modulate, and manipulate sounds in real time. The control center can be configured to 5 different user presets, making it easy to switch between your settings at any point during use.

Although it may seem like a perfect choice especially considering the cost, the drawback with the Nektar Impact LX49+ is that users often struggle with its USB connectivity, seeming unstable at best.